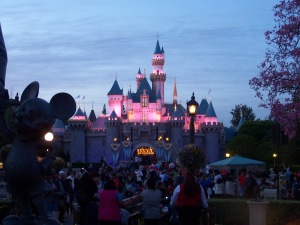 So! We finally got to take our daughter to Disneyland! It was a fantastic trip… we spent a week in Southern California, 3 of those days at Disneyland. I actually was born and raised in SoCal, and haven’t been back in over 25 years, so it was fun to drive around seeing the “old stomping grounds”.  Kiki even (mostly) pretended to be interested, lol. The home I grew up in, the schools I attended, places I hung out… And she adored Disneyland, even though she’s already 15   🙂

I can’t believe my feet and legs held out through 3 days of Disney. At my age and weight I was really concerned… in fact, I had been kinda paranoid about the whole “will I fit on the rides?” scenario, but after doing some online research, I realized I am on the thin side of people who go to Disney (holy crap on a cracker!!) so there were no problems at all… in fact, I think I could’ve walked around another day or two!

Crazy stuff? We spent over $10.00 on a caramel apple for Kiki… but I would’ve spent this much on one for each of us if I’d known how amazing it tasted!!  Wow. And of course, Monte Cristo sandwiches at the Blue Bayou… yummmmmm!!

We were able to basically stay in Cali for free; thru a “friend of a friend” kind of deal we stayed in the home of a couple who was out of town on their own vacation. That in itself was so great – since we live with my parents we have very little time of just the three of us being “our little family.”

But I want to go back!!  Now!! You know how vacation isn’t reality, and I don’t really love my current reality, and of course DISNEYLAND!! and we ate whatever and I didn’t even worry about my diet (and FYI I didn’t gain one single pound on vacation! must’ve been all that walking?) so, I just want to be there and not here… maybe I can live behind “Small World” in the shrubbery or something… lol

stuff I talk about

(im?)Proper Parenting Art "Therapy" Christianity ~ trying to walk the walk Computers and Internet cooking and baking Crafts and other messes I make Deep Thoughts for Those Who Take Life Way Too Seriously Family Matters Food and drink Friends Friendships Holidays and Holy Days home decor Homeschooling Idaho I wish I could remember more of my memories! Just another day in the life Lessons I've learned love & marriage - yikes Mental & Physical Health (or the lack thereof) My Little Kiki My Pet Stories News and politics Observations Question of the Day Teenagers The Real Me Travel Uncategorized Weird stuff

People are reading this stuff

What I’ve talked about lately